Today I went to the Zanadu comics downtown store to see Scott McCloud who was there with his whole family on their ambitious 50-states book tour.  He is promoting "Making Comics", a must-have for any cartoonists' library.  I met up with Frank Young, my collaborator on the Carter Family project, and we waited in line.  Dalton Webb was there ahead of us, and gave Scott a copy of "Moxie My Sweet".  When we got to the front of the line, I took Scott's photo. 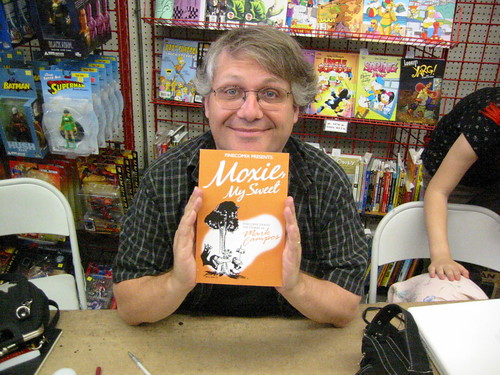 He interrupted me before I could talk to him and said his eye was catching a box on a shelf directly behind my head.  I turned around and it was an "Earth X Thor Godess of Thunder" bust.  Or what we immediately dubbed "THOR... with breasts."

This is what got his attention:

You see, to comics readers, Thor is pretty much always a man and does not have breasts.

But Marvel Comics created a  different version of earth (I guess) where their characters are mostly female, and therefore can have breasts.  Scott talked a bit about the strange things Marvel is doing, making their superheroes into zombies, and such.  Scott's wife Ivy pointed out that there is now a Peter Parker and Mary Jane Watson romance comic.  I have always thought that SPiderman was pretty much a romance comic with intermittent fight scenes.

We then all expressed a collective interest in seeing "Batman... with breasts", but regretted that DC is always a few years behind the curve.  Marvel is apparently doing some very strange things these days.  And good for them!

We presented Scott with a copy of our Carter Family "pilot episode" (which appeared in Kramers Ergot 4) and were delighted by his positive response to it.  He gave us a few good tips on pitching it to agents and editors (though he is self-deprecating about how useful his tips might actually be).

We talked about some other things, computer drawing tablet touch screens and light pens, etc, and could have kept talking all afternoon.  But there was a line of people behind us, so we thanked him for coming to town and headed on out.  Scott is such a nice guy.  It was great to get to talk to him for (quite) a few minutes.

Afterwards, Frank observed that the main thing Scott does is make people excited about creating (and reading) comics.  I agreed; that's a spot on assessment of Scott McCloud.  We headed over to Top Pot for some coffee and donuts and planned out some more of our Carter Family graphic novel.