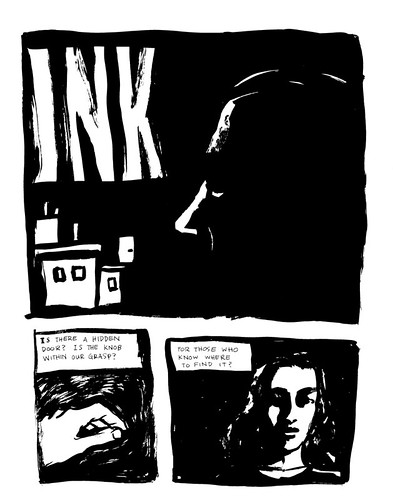 This is a last minute announcement for a little exhibit of my comics art in the little lobby of Capitol Hill's Theater Schmeater this month, while they are performing the play Maria/Stuart by Jason Grote.  I will be showing art from my "INK" comic, which you may have already seen at the Sessions Gallery in Ballard, or more recently on the walls of ZAPP.    I also have two pages from my "Origins of Ulysses" comic, from back in the 90's.
The main character in the play, from what I've heard, is the writer of a comic book called "American Male", which is a Captain America imitation.  His villains are pretentiously modeled after Chekhov plays (i.e. The Seagull, Uncle Vanya, The Three Sisters, and The Cherry Orchard (with all the powers of a cherry orchard)).  If I can find a little time, I hope to draw some "American Male" fan art.
http://www.schmeater.org/maria_stuart.php

I haven't updated this site in a while, but I have comics posted here.
Including abio of the young Pablo Picasso I made when I was still a young man.
Collapse