Last night I dreamed I was watching one of the Lord of the Rings movies, and Willie Nelson was in it, playing an old, bearded wizard.  I was surprised for a second, but then kind of was like "Oh yeah, wasn't Willie Nelson good in these movies?  I always forget that he's in them."  He spoke with a voice kind of like John Wayne's in "The Searchers."

I went through my whole day today (Sept 22), and was so busy I forgot that this was the 20th anniversary of my first professional pubished comic strip, which appeared on Sept. 22, 1989 in my school paper, "The Flat Hat."  My 20th anniversary as a cartoonist!

I received the new issue of "KING CAT Comics and stories" in the mail today, and noticed that it marks John Porcellino's 20th year drawing KING CAT.  Huzzah! 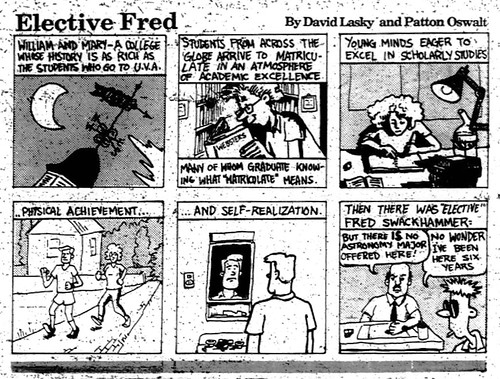 20 years ago, Patton Oswalt and I collaborated on this strip.  Though my name comes first in the credits, he was actually the writer and I was the artist.  As you can see, I was still learning how to draw comics.  This reproduction was found in the online microfilm archives of "The Flat Hat", which is why it has all those blemishes on it.

Patton has gone on to achieve all kinds of success as a comedian, actor, and writer.  It's been exciting to follow his career and see him on TV periodically.  I always knew he was destined for greatness -- I just thought it would be as a journalist (he was quite the collegiate reporter, let me tell ya).

Tomorrow night in Seattle I will read a group of all new poems called "THE CATALOG of EXCEPTIONALLY RARE COMIC BOOKS."
Details here.
Cienna Madrid and Daemond Arrindell will also be presenting new work that is not in a form they are comfortable with, hence the name: "Trading Places."

I am posting a sample poem behind the cut...